If you have lived or worked in Thailand for any length of time, you have probably come across a situation where you have been asked by a state official to pay a bribe. It happened to me this year while I was renewing my visa and work permit. I needed to collect some documents from the revenue office to prove that I had been paying tax. It wasn’t really a big deal and shouldn’t have taken long. But this time, one of the bosses in the inner office took note of me and said that it would be 1,000 Baht for him to process my documents. This is usually free or at the least a token amount to cover costs of printing out the documents. As he said there wouldn’t be a receipt, I knew straight away that he was asking for a bribe. I refused to pay and we had a stand-off in the office. It took a while but I did eventually win. 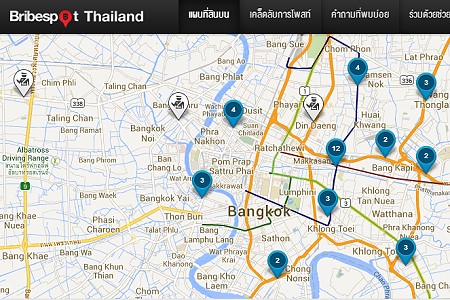 For most people it is not advisable to argue with officials when they demand a bribe. It is risky and could make your situation worse. It is also not a good idea to take a picture and post it on social media like I did. But, I was reasonably confident that as I worked for the local media, my colleagues would back me up if anything went wrong. When most people face this, they feel they have no choice but to pay. No-one likes losing in situations like this, but now there is a safer way for you to get your own back. You can now report scams or corrupt officials by using a smartphone app or by a web interface. There is even a map where you can see where other people have faced problems. It is aimed at Thais but it looks like many expats have already made use of this free service. The objectives of Bribespot Thailand include the following: “To empower the public to proactively respond to public sector bribery solicitations they encounter by using the localized Bribespot Thailand platform to post details of the incident” and “To enhance the capacity of Thai authorities to combat petty corruption by making available information on bribery incidents in an easily accessible manner”.